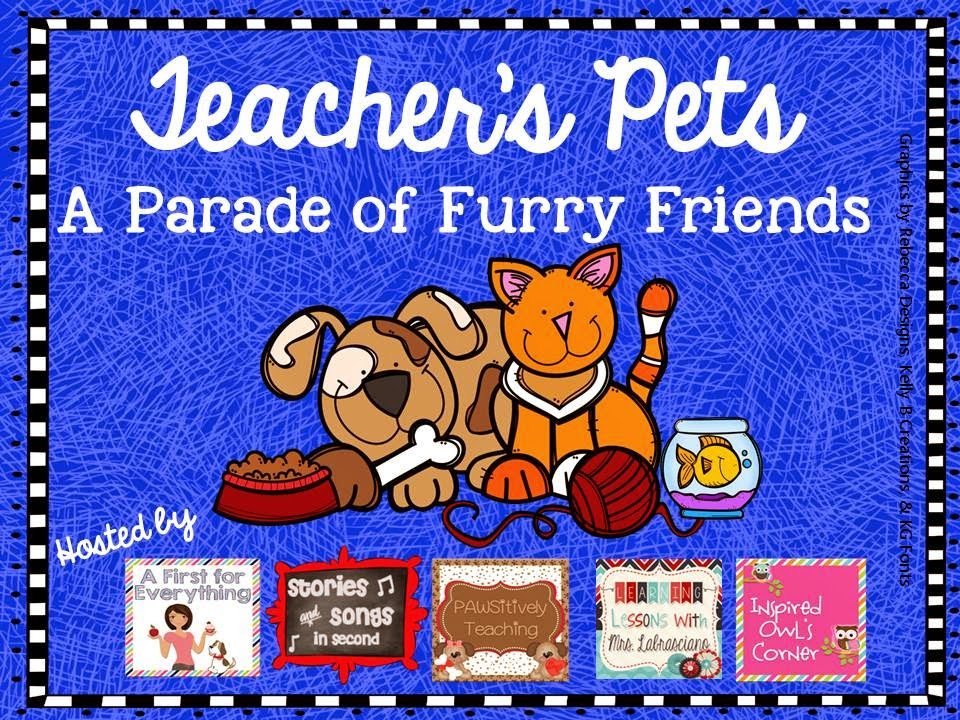 Hello everyone!  I am so beyond excited to be participating in the Teacher’s Pets linky party and giveaway with so many fantastic bloggers!  When Julie from A First For Everything mentioned that she was hosting a linky along with other  bloggers that had to do with your pet, I knew I needed to jump at the chance to be a part of it!  Keep reading for a pet themed freebie and a chance to win $100 to Amazon and more great prizes!

If you’ve been following my blog you probably realize this by now, but if you’re visiting for the first time it’s important to know that a very significant member of my family is my dog Roger!

We adopted Roger two years ago this May and I can’t imagine our lives without him in it!  For lack of a better word, I stalked his profile on PetFinder when he showed up on the shelter’s site that we had been working with.   The instant I saw his picture I knew he was meant for our family.  As we were walking up to the shelter’s doors the day we were scheduled to meet him, he was being taken outside for a walk.  He ran right up to me and the rest is as they say, history!

Here’s Roger while we’re still at the shelter the first day we met him!  So smiley and happy, he barely stopped moving the whole time! Oh foreshadowing.
Baby’s first car ride!  He was very sleepy on the car ride home.
Here is one of Roger’s favorite spots in the house!  He loves to be the watchdog for the neighborhood.  I have nicknamed him CatDog!

I always say that it’s Roger’s World and we’re just living in it!  Here he is in all his glory sitting at the head of the table after Thanksgiving dinner.  “Where’s my turkey????” 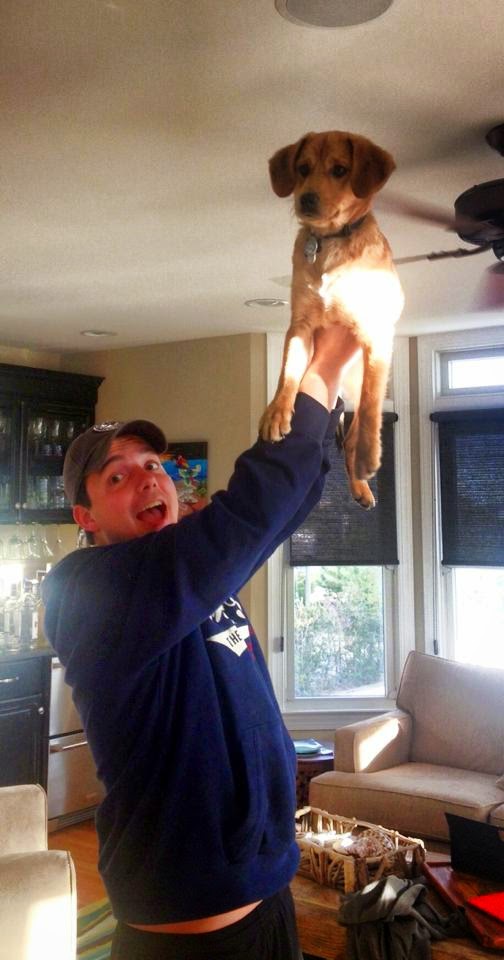 This has become a summer tradition for my husband.  Mr. Y is a HUGE Pittsburgh Pirate’s fan and tricked me into naming our little love after their mascot.  When the pirates win a baseball game, they raise the “Jolly Roger,” flag.  Don’t you know that cute, very original, human name that my husband presented to me before we adopted Roger, was really modeled after his favorite team?!  Fine Mr. Y you win this round!  Oh well, it definitely fits him and now anytime the pirates win OUR Jolly Roger gets raised!

Even though I don’t have a real class pet, Roger quickly becomes our class mascot for the year.  I have always said that it’s so important for my students to be able to get to know me in order to trust me.  If they don’t know the person I am, how will they feel comfortable opening up to me?  I find that introducing them to Roger from the beginning, telling them stories, and involving the kids in his antics is a great way for the students to connect to me!  Here is a photo collage of Mr. Y and I trying to “raise the Jolly Roger,” and it lives on my windowsill in my classroom!  The students think it’s hysterical! 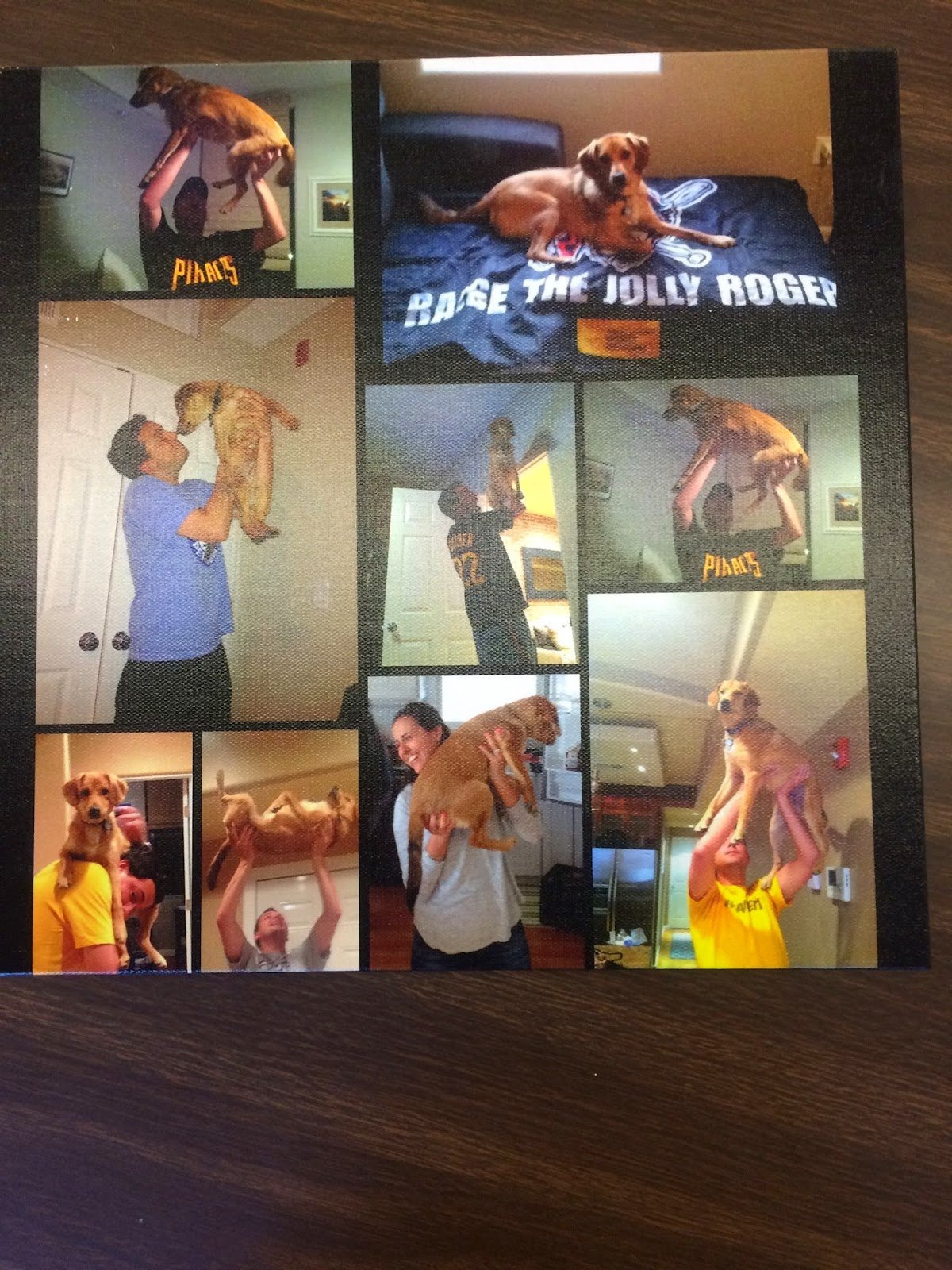 There are plenty more pictures of Roger all around the room and my kids are always making him drawings and asking about him!  He tends to show up in almost all of my writing workshop mini-lessons and sample texts. 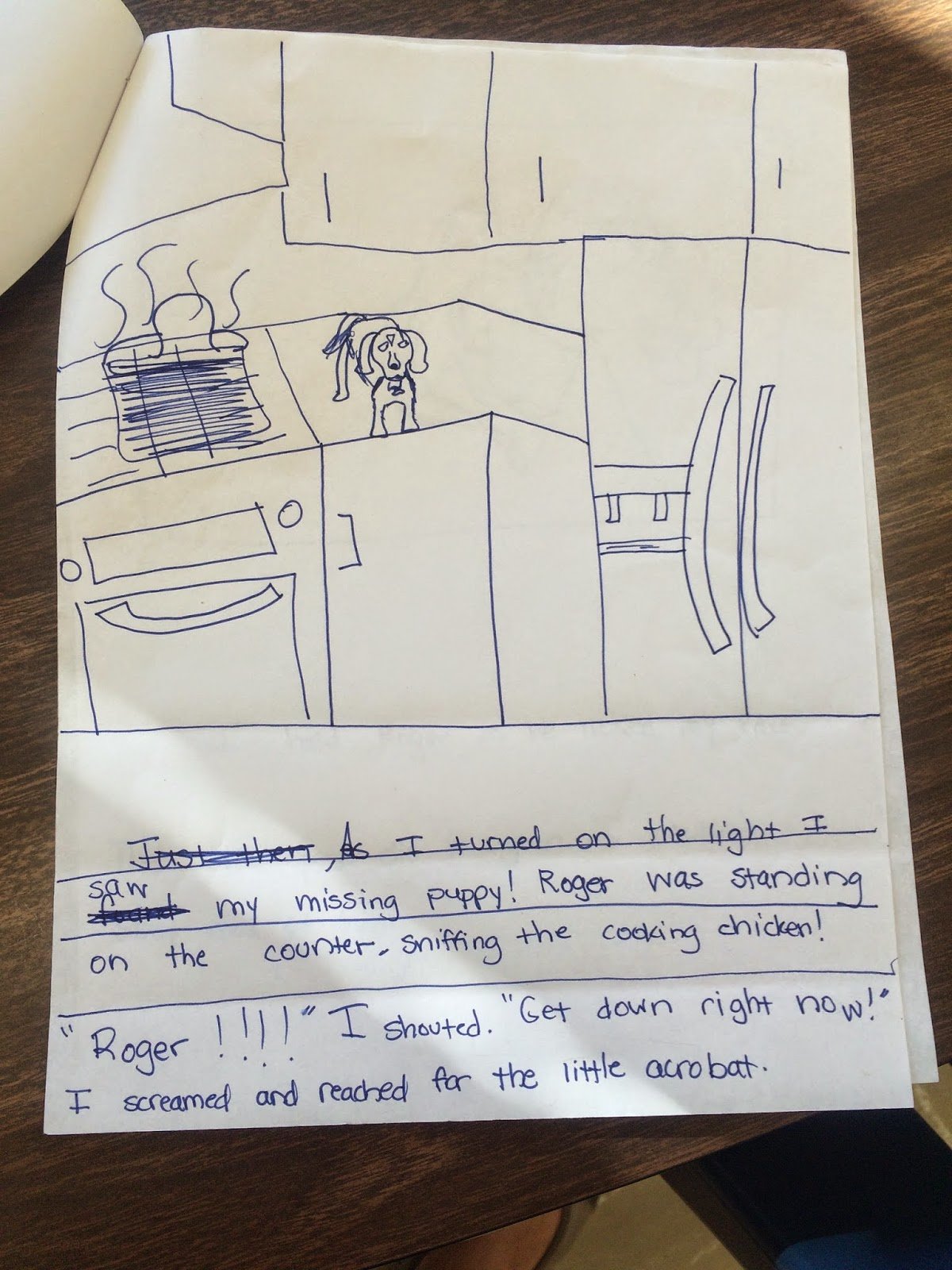 When we were working on our Small Moment writing unit at the beginning of the year, I knew the perfect true story to share with the class!  One morning Roger had disappeared from the bedroom early on.  I happened to be cooking something overnight in the crock pot and don’t you know that this was where I found him the next morning… 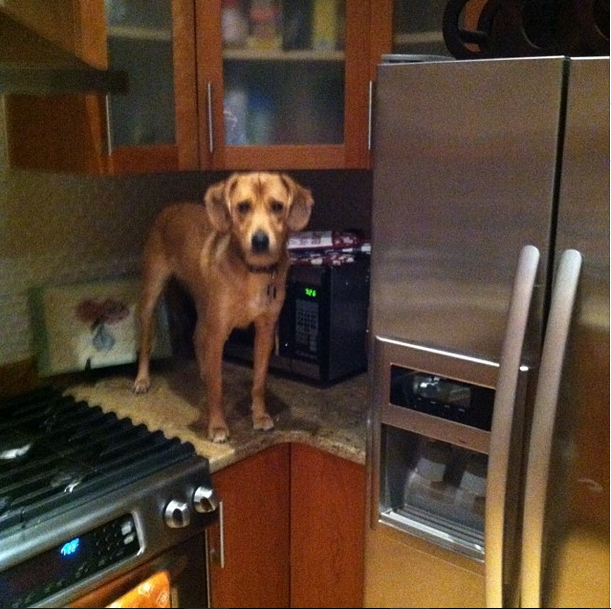 As angry as I was at the time, this photograph and story served a higher purpose!  My kids couldn’t believe that he did something like this and were easily able to come up with true silly moments that occurred in their own lives after hearing mine.

I had to use detective dog clip art when designing my drawing conclusions packet of activities.  I think the dog looks just like Roger and the kids did too!  In this pack my students worked on four case files given to them by Detective Dan and Inspector Spot.  They took their jobs very seriously and worked so hard on drawing conclusions based on the text passages in their case files.  Along with the pet themed detective agency and printables provided in the packet, there is also a Spin a Clue with Spot drawing conclusions game!  My detectives were all about this and loved solving the riddles and moving across the game board closer to Spot! 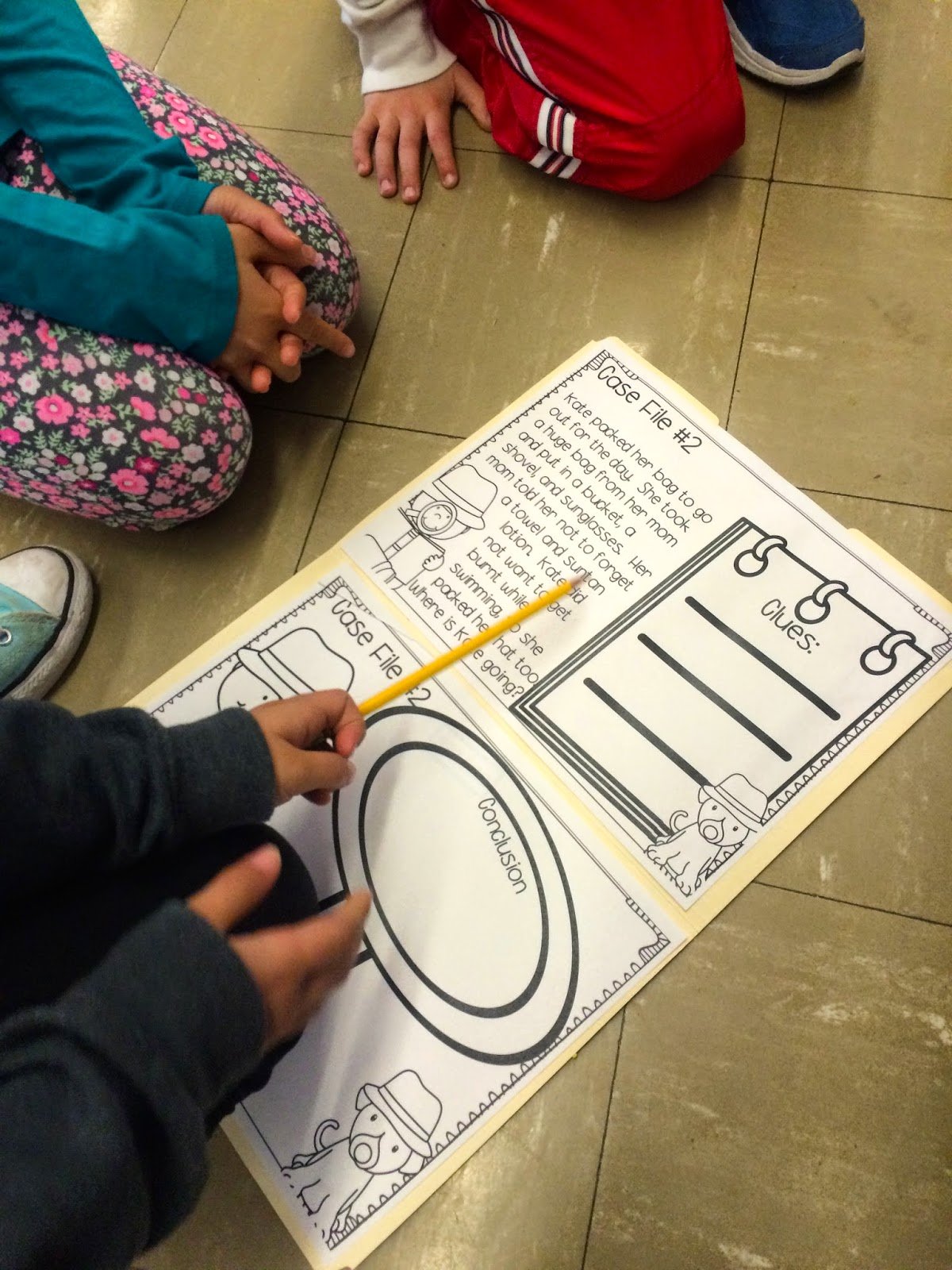 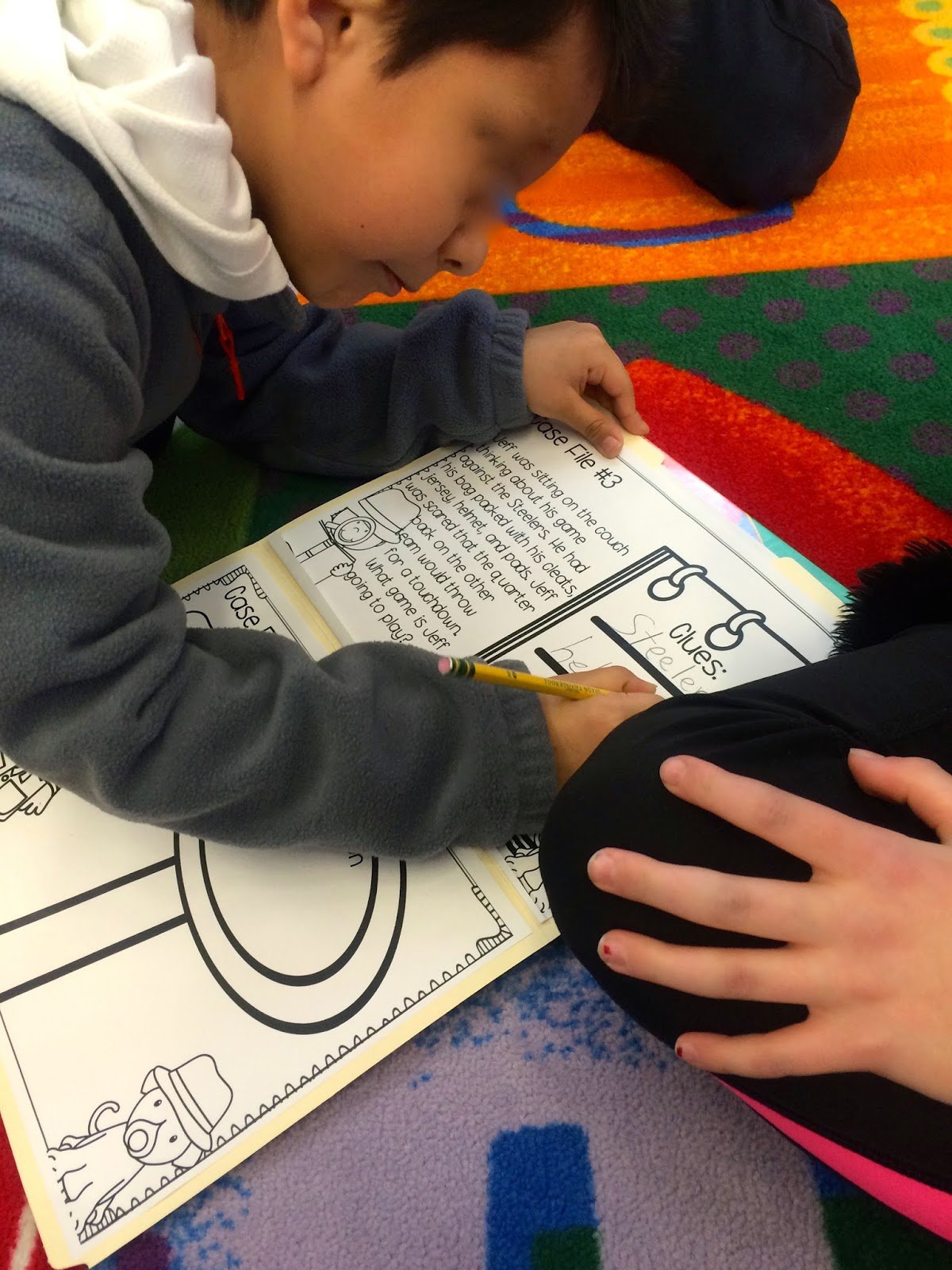 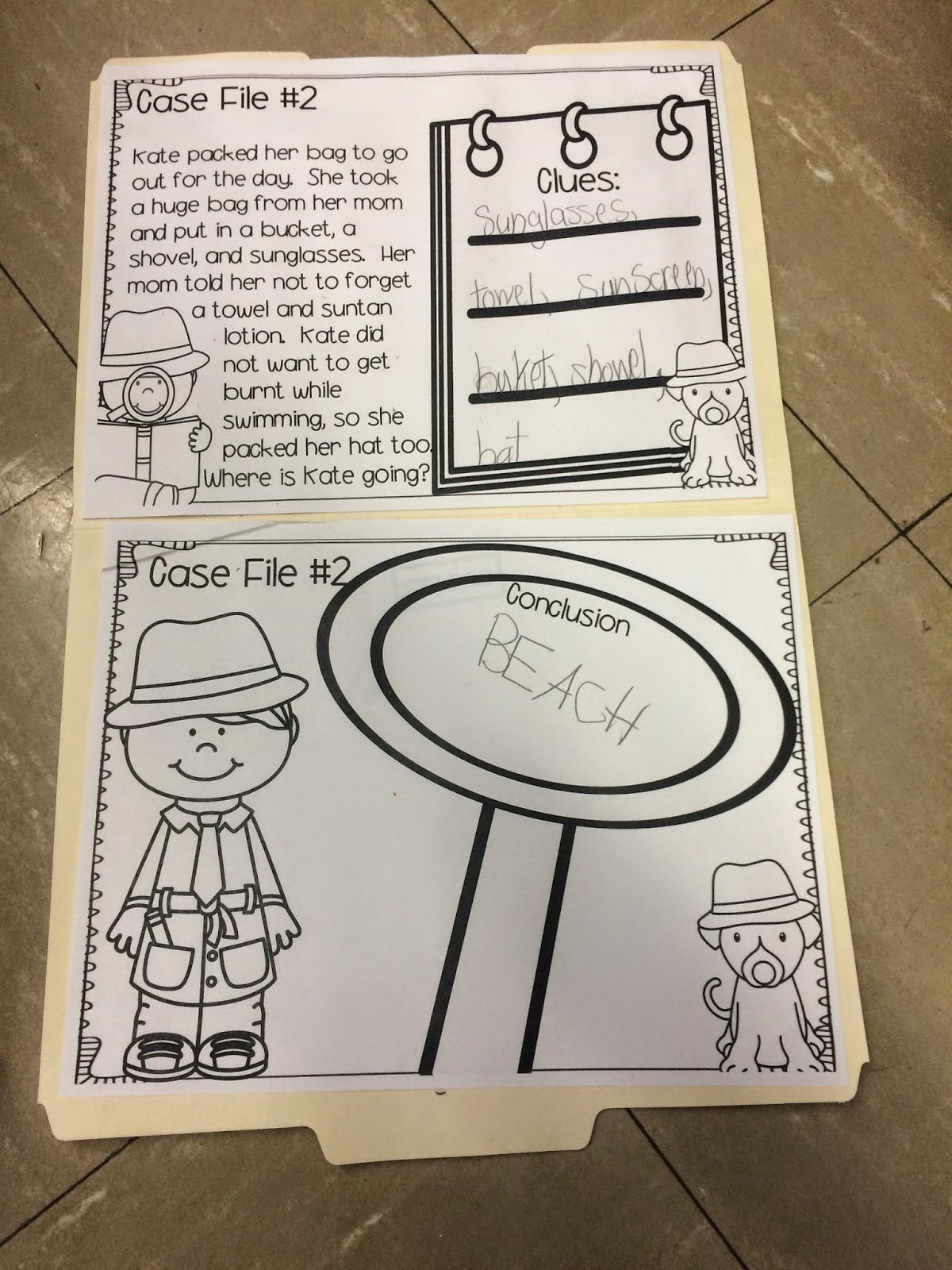 Here are a few more examples of using Roger during writing workshop.  I love Lucy Calkins Units of Study and in order for my mini lessons to be effective, my students need to see me write about my life.  Roger constantly provides tons of inspiration.  The story above was a mentor text during Small Moment writing, I have used Roger for How-To writing, and for All About Books! 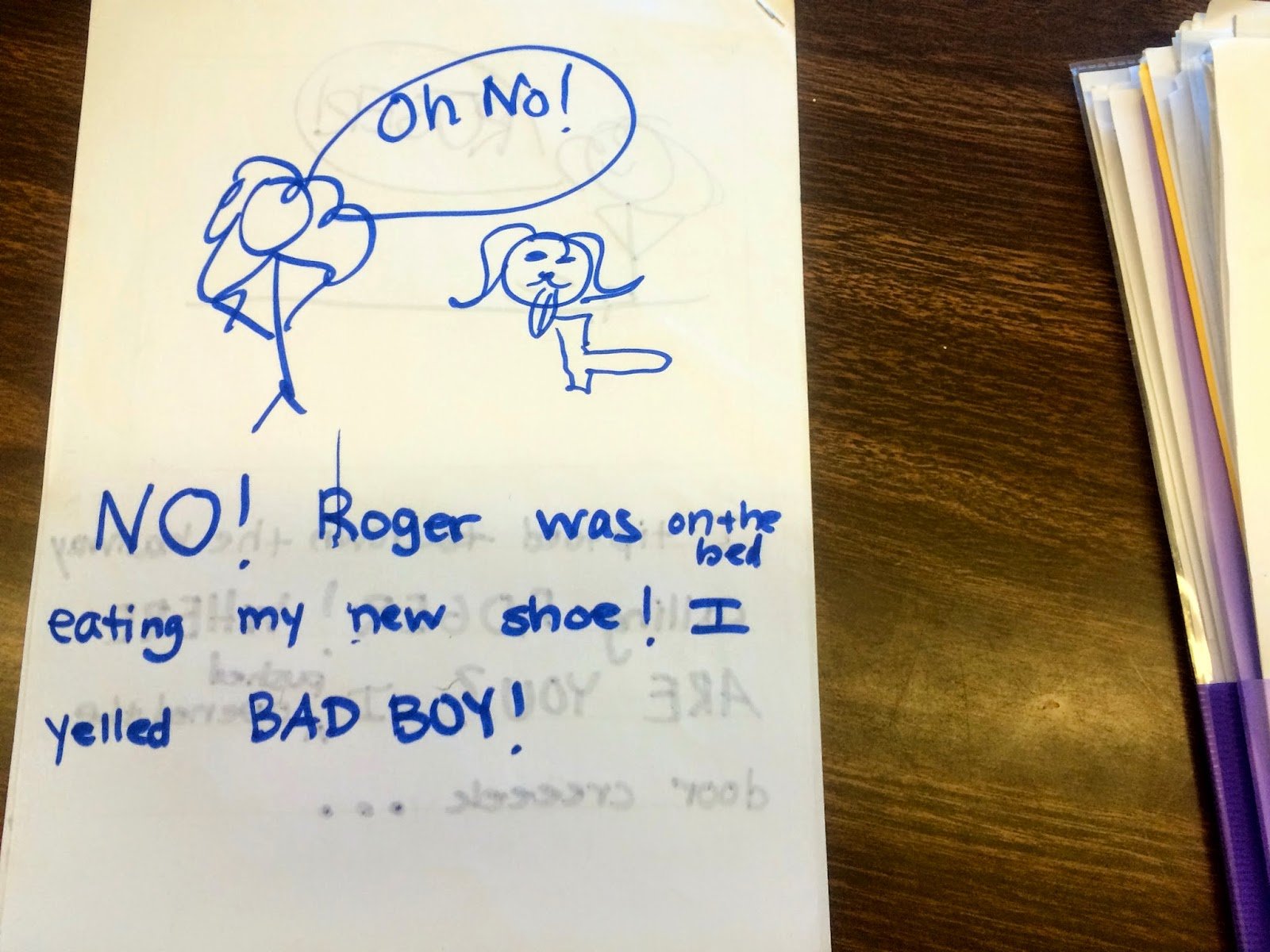 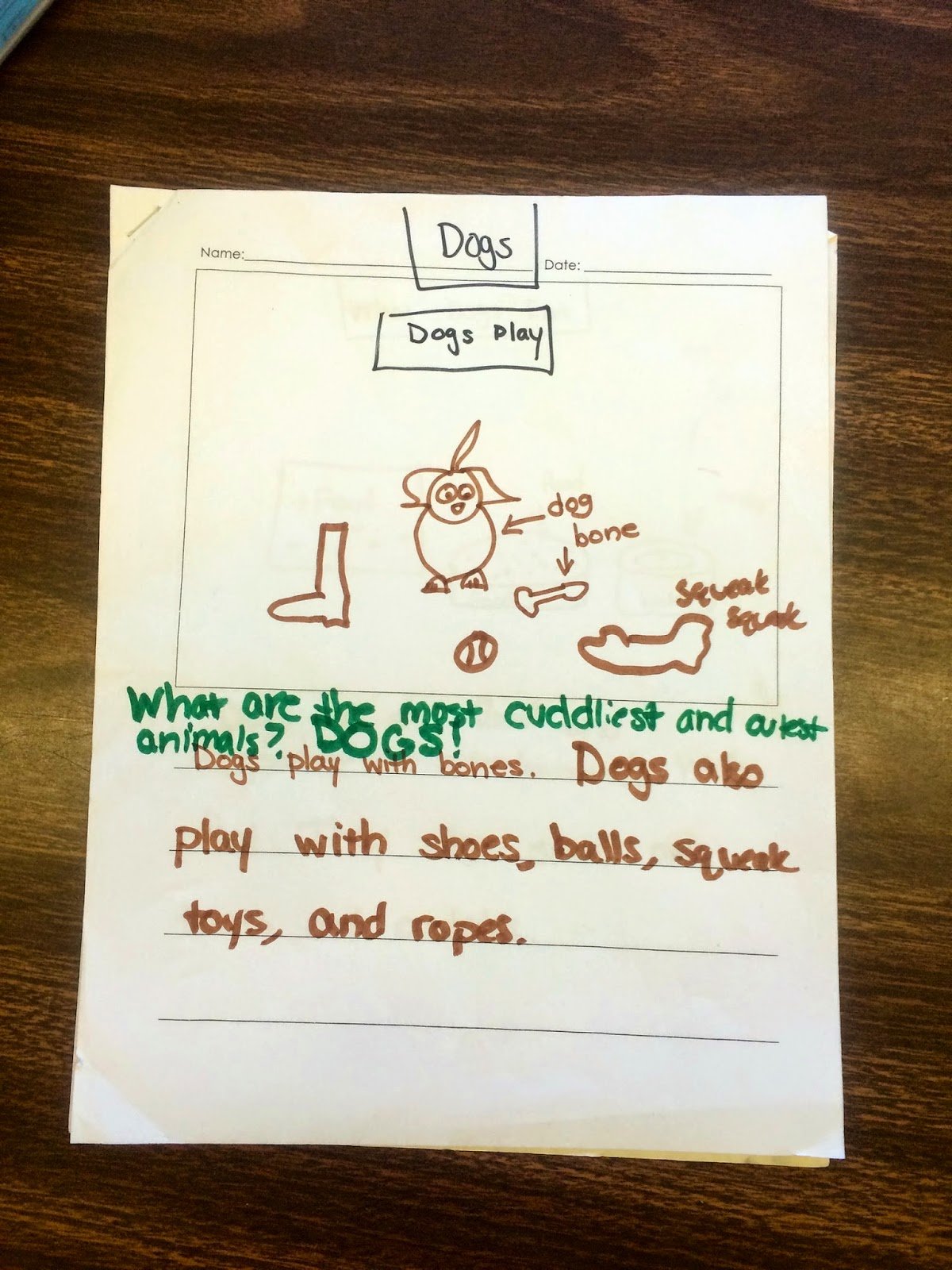 My students quickly realized I love everything and anything that has to do with dogs.

There really is never a dull moment with Roger Dodger, as we nickname him sometimes.  He is quite the acrobat as you’ve already seen from the above picture of him on the counter.  Here’s my photo evidence of his acrobatic ways! 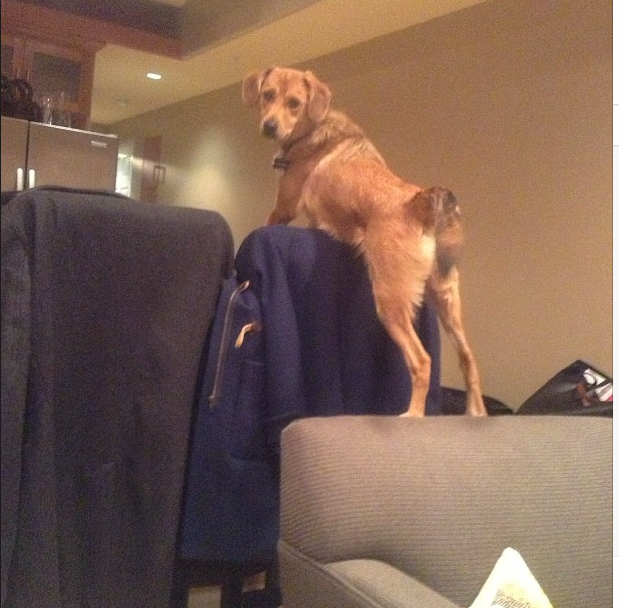 My husband and I have come home too many times to magically opened cookie boxes that we hid on top of the counter with no cookies left in it!  Roger has gotten a hold of cookies, hershey kisses (oh that sent me into a huge panic!), and hotdog buns that were left on the counter when we weren’t home. Lesson learned, everything is now hidden very well when we leave the house!

Our favorite pet toy has to be the classic rubber kong.  Roger has separation anxiety when we leave the house to the point where he will cry and rip pillows apart the entire time we aren’t home.  We consulted our vet about this and he said it would be best to try and distract him while you’re getting ready to leave with frozen peanut butter in a kong.

It has been the best thing that ever happened to us!  We put peanut butter in the kong at night and throw it in the freezer.  Before my husband leaves for work (because I’m out before the sun comes out womp womp) he takes the kong out of the freezer and gives it to him while he’s putting his coat on and walking out the door.

Roger has no idea that anything is going on and is blissfully happy with his treat!

Thank you so much for reading my post and visiting!  I have included a freebie from my Detective Dan and Inspector Spot packet!  You can use this drawing conclusions game separately while studying drawing conclusions.  Students pair up and spin the spinner.  Whichever category they land on is the riddle card they choose.  Their partner reads the riddle and if they get it right they move that many spaces on the game board.  The first to the finish line is the winner!  Get it at my TpT store here! 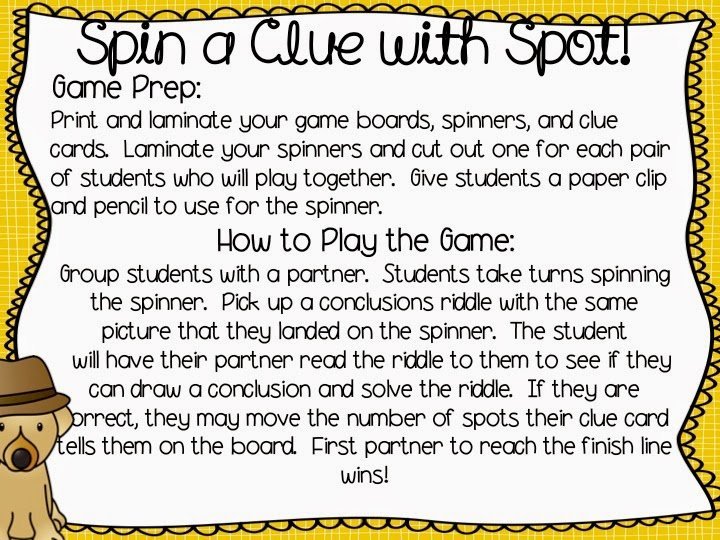 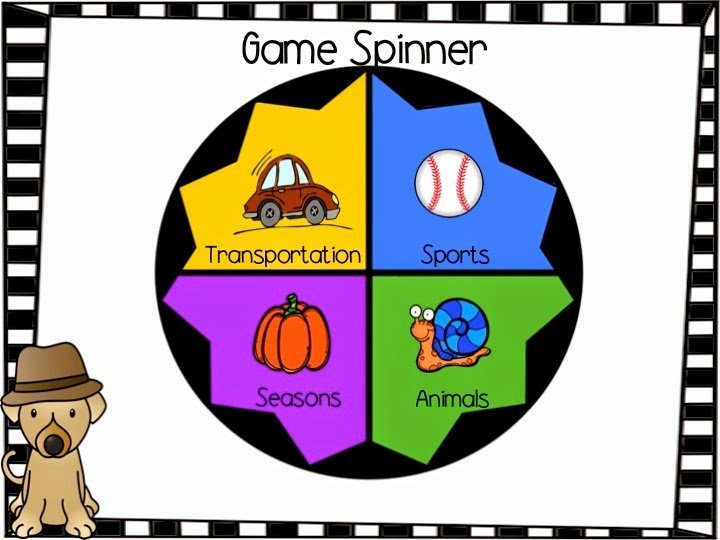 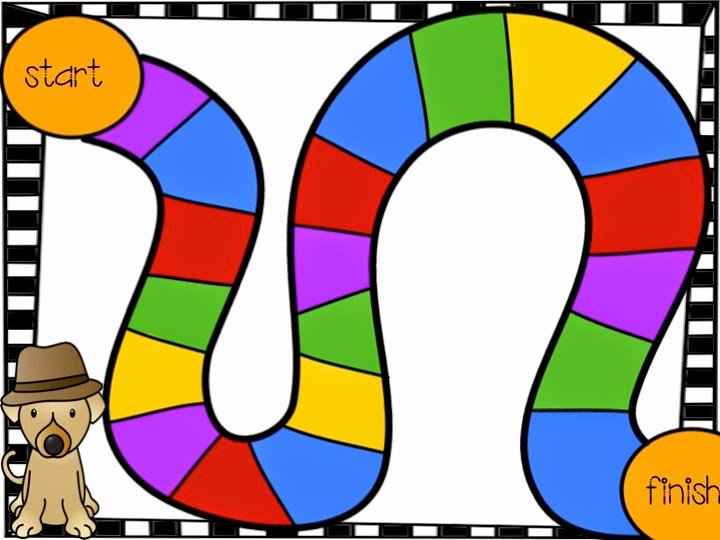 Don’t forget to link back to the other bloggers to see their pet posts and more chances to win!  Thanks for visiting! 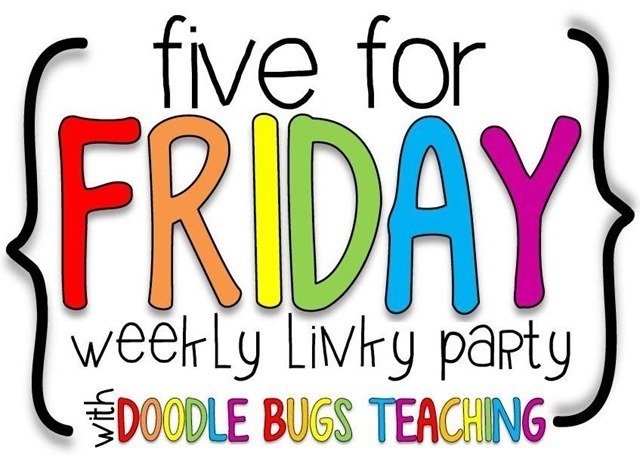 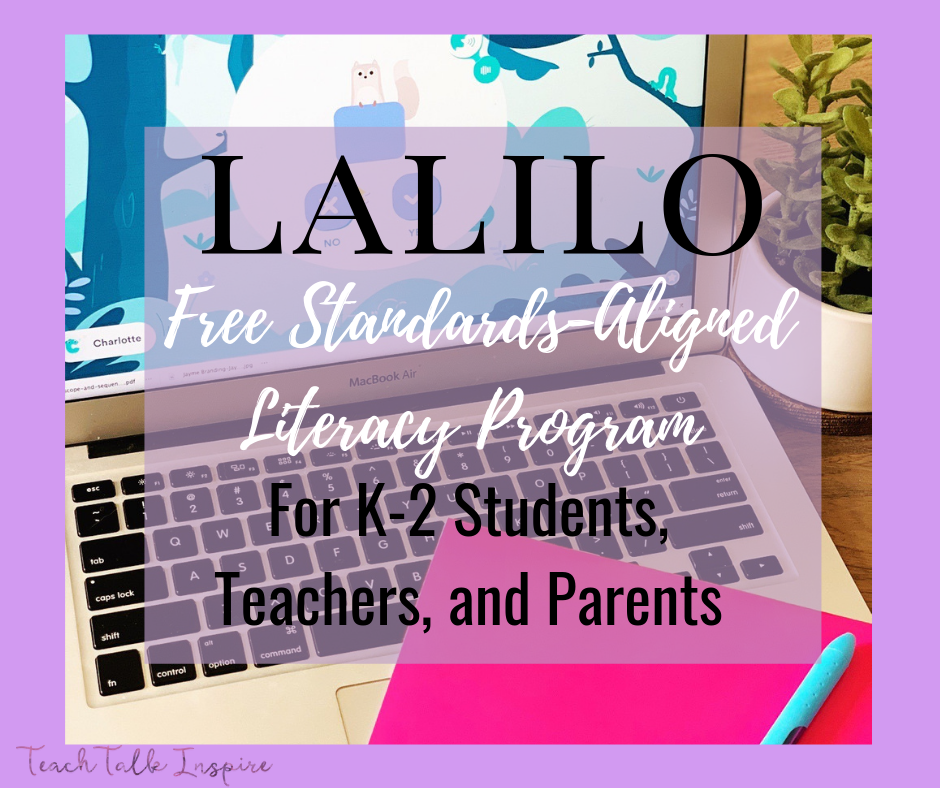 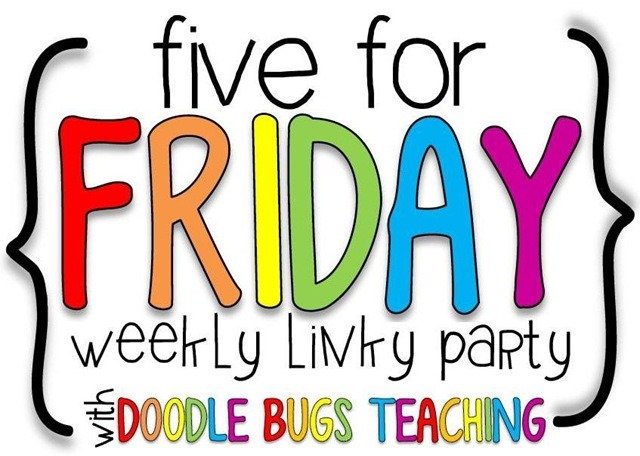 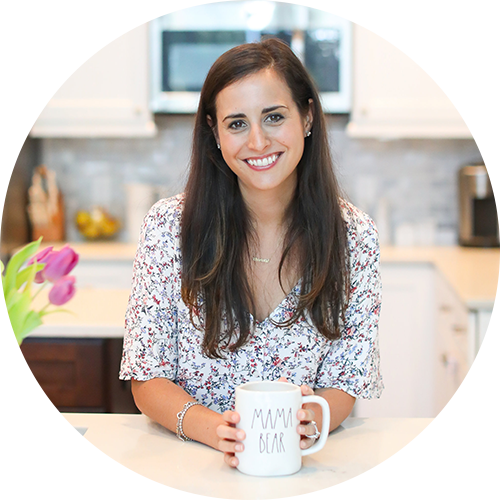 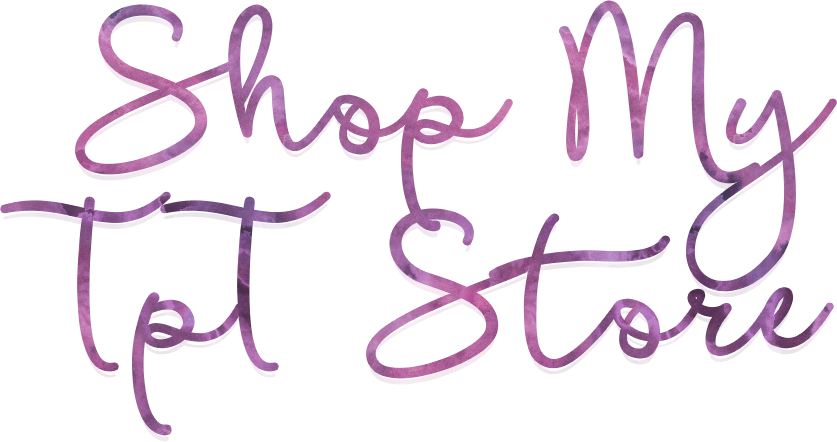